skip to main | skip to sidebar

Symptoms of Lyme Disease in Babies 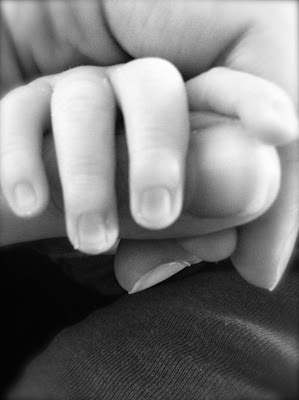 Our visit with the pediatric Lyme specialist went well--much better than we'd expected.

"Your baby doesn't look at all like a Lyme baby."

Best thing I'd heard in ages, but of course, my immediate response was, "Well, what does a Lyme baby look like?"

Here are a few helpful things I learned during our appointment, including some signs to watch out for after your baby is born (Keep in mind that this is just another opinion among many--each doctor has a different take on the Lyme transmission subject. This particular doctor is considered the best for kids, and I genuinely liked him and what he had to say):

- This LLMD has seen about 400 newborns, half ended up having Lyme, half were fine. Most of the sick babies came from mothers who didn't know they had Lyme during pregnancy and hadn't been treated with antibiotics

-If a mother is on one antibiotic during pregnancy, she has a 50/50 shot of passing on the disease; If she's on two antibiotics throughout, Lyme transmission is pretty much unheard of

-There are other ways to test your baby in addition to cord blood testing. The placenta can be tested, foreskin on a boy, and urine samples

-Positive Lyme test results don't necessarily mean your baby is infected. IGeneX tests look for DNA fragments from the bacteria. That means that at some point during pregnancy, DNA from the bacteria was present in the blood that was shared with the baby. That doesn't mean it was an actual live infection. It could be mom's dead bacteria that was killed by antibiotics, or it may not have even been enough bacteria to make an impact. The test simply shows that something was there. This brings up the question of whether it's worth it to get anything tested at all, since it's impossible to tell what a positive result means.

If I had the opportunity to do it all again, I would still have the boys' cord blood tested, and I'd add in the placenta test (not really interested in urine or foreskin testing). Much of it has to do with the fact that I sleep better at night knowing what we are facing, but now I also know how assertive I have to be with laying the groundwork for treatment based on the initial results. Wyatt's test came back negative, and though I will have him tested once he is a little older, I don't have the sense of urgency that I do with Emmett, who had a positive test. We have actual documentation on file with all doctors, Lyme literate or not, so in case his health declines, or we face other Lyme related problems later, we can trace it back to the beginning. Doctors cover their asses; we're covering ours--I refuse to deal with anyone telling me I'm crazy or paranoid if my kid has strange symptoms five years down the road. I journeyed through that section of hell while trying to get my own diagnosis, and I won't put that on my son.

-If the cord blood or other tests are positive, a Western Blot should be done on the baby to confirm. It's hard to get blood from a newborn (their veins are pretty much nonexistent), and it's even harder to watch your baby in pain. I just kept reminding myself that Emmett wouldn't remember anything from that day, and it was going to help him in the long run

-90% of Lyme babies that come into this doctor's office are what he calls "floppy babies." That have very poor muscle tone and they have no head control. That's the number one sign of Lyme Disease in a baby

-Lyme babies will also have painful joints. How do you tell if a baby has painful joints? When you touch/press the knee, ankle, wrist, etc, the baby will cry out and retract in pain. At the very least he or she will flinch and whimper

Here are a few other symptoms to look out for:

Some of these things come with the territory when you have a baby, for instance, they wake up a lot. Most parents have an irritable baby at some point, who has a meltdown after a long day of being overstimulated. I think the doctor is talking about severe instances that never let up.

When I expressed concern that Emmett has terrible reflux, hates everything, never sleeps, and can cry like someone's torturing him for six hours at a time, he said that reflux and digestive problems are signs of Lyme, but a doctor can't make a diagnosis based on this alone, as many otherwise healthy babies suffer from painful reflux. Same thing goes for irritability. The idea is to rule out some symptoms--if the irritability and crying subside after reflux treatment starts, you know what the problem was. If the baby is still experiencing may of these symptoms after reflux treatment, he or she should be evaluated again. In Emmett's case, the other symptoms improved by 75% within two weeks of reflux treatment. More serious symptoms like poor strength, growth, and muscle tone/head control should send up a red flag right away.

I'm not going to lie--I'm still scared, and I wonder if I passed this on to my little one. I do feel much better knowing that treatment for him would not be long or intense, and that he can go on to live the normal life of a healthy kid. Blood test results won't be in for another week, and I'll let you all know as soon as I hear something.

As we went to leave, Emmett's doctor smiled at me and said, "Don't you give up either, dear. You're much more fixable than you think!" It's too bad this guy only works with children--I'd be happy to let him take a crack at treating me. I still have hope that in a few years all of this will be a distant memory, and I can tell my kids, "We had a rough stretch when you were babies, but we're all fine and well now."
Posted by sara at 10:01 PM

sara
I am a mother and writer with Chronic Lyme, on the road to acceptance and recovery. I was bitten in 1996, diagnosed 2008. I am living proof that it is possible to live meaningfully and have happy, healthy children while battling this terrible disease.